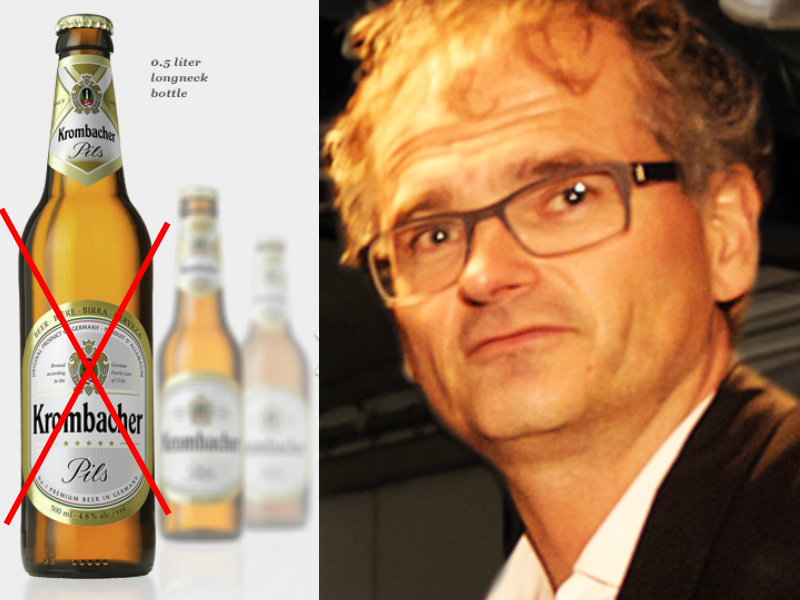 It looks like Germany could now ultimately say goodbye to the returnable pool bottle. Krombacher, the best-selling Premium beer brand in Germany, now decided to introduce its own branded brown glass bottle in October. Bernhard Schadeberg, managing director of Krombacher Brauerei Bernhard Schadeberg GmbH & Co. KG who took over from his father Friedrich Schadeberg (96) in 2001, originally promoted a new pool bottle but could not convince enough partners for his idea. When final talks failed in February this year he started the project of introducing an individual 0.5 liter bottle with embossed brand name replacing the old longneck pool bottle.

The replacement will take place in several steps.: In October Krombacher starts with side brands like Krombacher Alkoholfrei (non-alcoholic beer), Krombacher Weizen (Wheat beer), Krombacher Radler (Shandy) and Krombacher Hell (Lager beer), in November the main brand Krombacher Pils (Pilsen type beer) will follow with the 11 x 0.5 liter crate and only after the Christmas season in January, the most popular packaging unit, 20 x 0.5 liter, will follow. It is estimated that Krombacher needs to buy 600 million new bottles with an investment of about 70 million Euro.

Krombacher was one of the few leading national brands which did not have an individual bottle yet. Other brands like Radeberger, Bitburger or Veltins use branded bottles with embossed emblems already for at least 8 years now. Brands form the North of Germany like Beck’s or Jever use green bottles which are not reserved for the individual companies but are characteristic for those beers. After Krombacher’s decision the pressure for the few remaining German premium brands with a national distribution is enormous. It is believed that only regional beers, which do not have the financial power for such a step, will stay with the old bottle.

But looking at the example of Munich’s Augustiner, one of the most successful and prestigious brands in Germany, might also help.  When more than 30 years ago in a first step most German breweries switched the old Euro beer bottle against the NRW beer bottle only Augustiner and a few very small local breweries like Tegernseer stayed with the old bottle. Many years later when the replacement was complete, Augustiner had an outstanding position with its bottle and became one of the most impressive success stories in the German beer market. Nowadays some national breweries like Erdinger even start distinctive products like Erdinger Urweisse in the old Euro beer bottles  to participate in the success of Augustiner and others.

The use of individual returnable bottles and the proliferation of bottle types  is heavily critized by environmental protection organizations because of the huge number of mixed and missorted retuned bottles.